A five-year-old in a pink and purple striped sweatshirt bares her teeth, growls, then plunges into a knot of snarling children.

In the scrum, a dozen kids ranging in age from almost three to just over eight are roaring and roughhousing their way through a game they have just improvised: lion–cheetah wrestling. The bigger children snarl as they grapple with one another while the smaller ones spar gently, cavorting on all fours on the edge of the tumble.

Play fosters empathy and makes possible complex social groups, according to researchers who study brain development and behavior. Early childhood educators, as well as managers in diverse fields who need to hire skilled problem solvers, find that a strong foundation of childhood play is at the core of imagination and innovation. Play may even serve as a short-term boost for problem-solving skills: cognitive scientists have found that young children who approach problems within the context of play are able to solve logic problems often considered beyond their cognitive abilities.

Play is more about process than content. At its best, play is self-directed and guided by fluid rules agreed to by all participants. But whether it is raucous or quiet, physical or mental, social or solitary, the act of playing seems to open the brain to possibilities. It is perhaps one of the best tools we have for developing our brains in ways that can help us learn how to survive in an unpredictable world.

Researchers have found that in nature, species that exhibit playful behavior tend to be smarter and more adaptable than less-playful or nonplayful species. Long-term studies designed to assess the evolutionary cost or benefit of play among grizzly bears on Alaska’s Admiralty Island measured the playfulness of young bears, then followed them into adulthood to see how they fared. Members of the more playful groups showed a greater likelihood of surviving into adulthood and, consequently, of reproducing, than those that were less playful.

Laboratory studies also have shown that young mammals deprived of opportunities to play or given only rote learning tasks have brains that are physically less developed than those of their frolicking peers. In addition, research has found that play-deprived primates are less able to deal with stress, which can result in fearful behavior in unfamiliar circumstances and overly aggressive social interactions.

We may be seeing evidence of these same effects in human children. Since the mid-twentieth century, say some experts, there has been a decline in the time allowed children for free play. During this same period, psychiatrists have tracked in children a rise in narcissism, depression, anxiety, and feelings of helplessness. The parallel between the results of animal experiments and these demographic trends hints at a causal relationship, researchers say, adding that the move from free-ranging childhoods to more structured school environments, less time for recess or play, and a greater number of organized extracurricular activities for even the very young may also be stunting the rising generation’s ability to think creatively and solve problems. 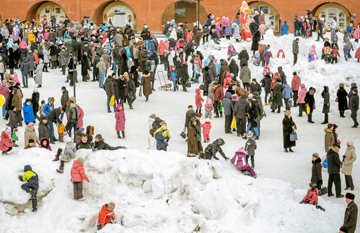 FAMILY FRIEZE: Opportunities for children to engage in free, unstructured play have diminished over the generations. Today, children’s playtimes often include some level of adult oversight and participation.
Photo: iStock.com

Insight into how children’s lives have changed throughout the millennia—moving from more free time to more structured time—can begin to be gleaned from anthropological reports of extant pre-agricultural cultures. In hunter-gatherer societies, youngsters spent much of their youth making up stories, songs, and games; mirroring adult activities; and learning how they and other living things meshed with the environment.

“Unstructured play was, and is, how children learn how to learn,” says Susan Linn, an HMS instructor in psychiatry and a research associate at Boston Children’s Hospital. “They learn to experiment, and they learn that they have the power to make changes in their world.”

Linn, who pioneered play-based therapies to help children cope with hospitalizations and other traumatic events, studies the effect that diminishing opportunities for child-driven play can have on developing brains.

“Child-driven, hands-on play is the foundation of creativity, constructive problem solving, and the capacity to self-regulate,” Linn says. “It’s the way that children wrestle with life to make it meaningful. It is, in itself, a survival skill.”

A recent study compared the cognitive outcomes of children in conventional preschool classrooms with those of children in Montessori classrooms. The researchers found that children in Montessori classrooms, which feature mixed-age populations and emphasize hands-on learning and play, showed greater gains than their peers in conventional programs in reading, math, and vocabulary, as well as in social competence and self-regulation. The latter is behavior driven by the brain’s prefrontal cortex, the seat of high-level cognitive processing.

And it’s not all or nothing. Researchers have found unstructured play to be helpful, even in small doses. In studies of kindergartners and elementary school students in schools that rely on structured learning, recess has been shown to improve children’s ability to pay attention and assimilate new knowledge and skills.

Learning changes the brain. As we learn, new synapses form, adding connections in response to stimuli from the environment. This capacity for change, known as plasticity, is amplified by just the sorts of experiences that play allows. Free play provides an environment rich in stimuli that can spark the formation of new neural connections. A child’s imagination can also trigger new connections that biologically tie together distinct areas of the brain and cognitively link seemingly disparate experiences.

You can develop your brain just like you develop your muscles through exercise, says neuroscientist Majid Fotuhi ’97. Doing exercises you don’t like—push-ups and pull-ups in the gym, for example—will provide some of the necessary stimulation to build your muscles, but the anxiety caused by a demanding workout or by the pressure to get fit releases stress chemicals. The stress associated with cognitive workouts—like cramming for high-stakes tests—can be especially counterproductive.

“In structured learning, you’re stimulating one part of the brain, but if it’s too stressful, it comes at the cost of increasing cortisol production, which inhibits learning and memory. It’s basically toxic to the rest of the brain,” Fotuhi says.

For children, his prescription for a brain-healthy lifestyle includes physical exercise and a balance of structured learning and free play. In his personal life, he’s had the opportunity to see how unstructured play allows his seven- and eight-year-old daughters to explore their talents and interests.

One daughter loves building structures with Lego blocks, solving puzzles, and doing mathematical problems. When Fotuhi comes home, she asks about the more interesting cases he had that day. His other daughter loves art, and spends her free time drawing and painting, listening to music, and designing creative costumes for her dolls.

“They’re going to be happier, more successful, and have better brain development if they do what they love than if we try to force them to learn what we want them to learn,” he says.

It is not hard to imagine a pack of lions and cheetahs, some clad in pink and purple stripes, roaring in agreement.

Jake Miller is a science writer in the HMS Office of Communications and External Relations.